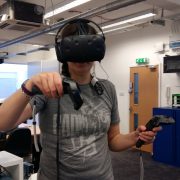 I love the concept of being able to paint and create in a 3D space, but as someone who has got motion sickness from other Virtual Reality experiences I was a little bit apprehensive about trying it out.

I need not have been worried, the HTC Vive headset was comfortable, stable, and clear. It was easy to manoeuvre around the space, with virtual walls marking the boundary so I wouldn’t embarrass myself tripping over a desk or chair.

The actual tool was really intuitive and easy to get the hang of straight away. With lots of interesting effects such as light waves, bubbles, and fairy lights to draw with. The effect was great and I enjoyed playing around with all the different strokes in the space. After a bit of playing I started thinking about actually creating something more than just squiggles. I wanted to start with some basic shapes – a sphere maybe – this was not so easy, with the paint appearing like a ribbon in the 3d space with no depth to it I ended up with lots of bits or lines of paint that didn’t really meetup. It took some time to control how the paint was going to appear from all angles – I think this would be something you would get used to though with more practice. After a bit of frustration with trying to create a sphere, I was shown examples of art work more experienced users had created. Looking through, I saw that using a white line to create a rough frame work and then building up the paint in kind of feathery layers was the way to go, great for creating feathery or furry creatures. I had another go, this time attempting a face, trying to treat the 3D paint more like actual paint, building up layers of colours etc. and starting with drawing a basic frame work to build on – I had a lot more success but still found some elements tricky – such as trying to get the eyeballs round with an iris on that sat on, or in the ball. From the front it looked ok, and from the side the face was ok, but you could see the iris’ floating in the air as a squiggle of paint rather than being on the ball. Again looking at other peoples’ attempts I think this just needs more experience, and more confidence to work larger.

For me, an extra feature that would be really helpful would be the ability to use shapes – such as spheres, cubes, oblongs and cylinders to build up a frame work first and then paint on or around them – this would have really helped with my eyeball debacle! I would love to have more time to play with this at home, but at a cost into the thousands for the headset, software and machine to run it on, that will have to sit on the back burner for a while.  But as the cost falls and availability grows for great VR tech, perhaps it won’t be too long…

Human curation – important now more than ever
Scroll to top